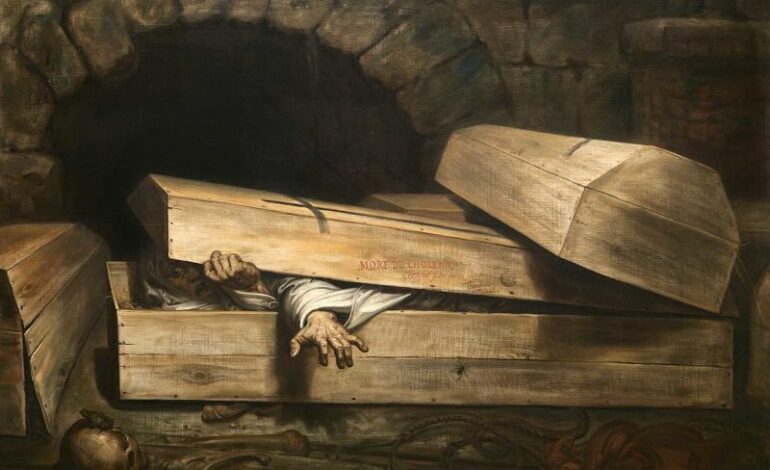 NEWS FROM THE GRAVE, &c.
At Basing-stoke, (a place sufficiently known by reason of the battle at Basing-House) in the County of Southampton, there lives one Mr. Blunden, a man of considerable repute in that Town, being one that drives a great trade in malt, &c. His wife was a woman whom I shall not attempt to characterize, because she was utterly a stranger to me, only thus far I may venture to describe her person, that she was a fat gross woman, and had accustomed herself many times to drink brandy. One evening above the rest, finding herself somewhat indisposed, she sent her maid to an apothecary’s in the Town for a quantity of poppy-water, whether by the direction of a physician or out of her own head (as we say) I know not : but she drank so great a quantity of it that she presently fell into a deep sleep, insomuch that all the people about her concluded her dead, there being not the least palpitation of the heart, motion of the pulses, breathings at her mouth or nose, nor any sensible warmth to be discerned in the whole body. The apothecary was immediately sent for, who by surveying the remainder of the poppy-water gave a guess at what she had taken, and concluded she would not recover her senses in eight and forty hours at least, and therefore he supposed never; From these words of the apothecary’s they concluded her stark dead, and that night laid her out, and though one of the persons employed about her observed that when she made any impression on her face the blood seemed to follow her finger, and by a kind of blush in her cheeks to be ashamed of their inhumanity ; yet such was either their haste or their stupidity, that they took little or no notice of it ; Her husband being then from home was sent to, and acquainted with the suddenness of the disaster, who was much surprised thereat, but having sudden and urgent business to London, and withal considering his grief at home would do his wife no more good than at a distance, he resolved on his journey, and the rather for the con- venience of buying mourning for himself and family, living orders nevertheless at his departure that the funeral should be deferred till his return, which he resolved on the Satur- day following, this being Tuesday, the 20th of July, 1674.*

‘Mr. William Blundon’ s wife huried July 15th, 1674.’ The 15th of July, in 1674, fell on a Wednesday, and to this extent the entry corroborates the narrative. He was no sooner gone but his wife’s relations to whom the management of things were committed, began to consider that it was a great while to Saturday, and that the season of the year being hot, and the corpse fat, it would be impossible to keep her, and therefore resolved to bury her the morrow, which accordingly they did, though many people admired they would commit a person to the earth before they were fully satisfied she was dead, especially in her husband’s absence, and contrary to his order. However, it being none of their business, they offered nothing against, so that on the morrow, all things being ready for the funeral (but the woman herself) away they carried her to Church, and the coffin being set down on two stools (as the manner of that Country is ) one of the bearers perceived both the coffin and the stools to stir, and was so unseasonably merry thereat as to whisper to his neighbour and tell him that they had made Mistress Blunden’s coffin so short that she could not be easy, for he plainly saw her stir. To which the other replied that if there were any motion it proceeded either from the weakness of the stools or the crowds of people that jogged them, and so there was no farther notice taken, but after the usual ceremonies of the Church she was committed to the earth : The Friday following toward the evening some of the Scholars of the Town being at play in the Churchyard near her grave, they fancied they heard a kind of hollow voice, as it were under ground, to which laying their ears and listening more attentively they plainly heard somebody say: Take me out of my Grave, which words the complaining voice repeated several times, intermixing them with fearful groans and dismal shriekings. The boys wonderfully terrified hereat ran away, and told several persons what they had heard ; but the relations were so unauthentic, and the story so improbable, that it was by all either slighted as childish, or reproved as fabulous, but stiU they affirmed it so stedfastly that on the next day, being Saturday, it came to the School Master’s ear, who immediately reproved some and chastised others for raising such reports.

Whereupon the boys being much, incensed at their unjust correction went again the Saturday noon to Mrs. Blunden’s grave, and not without some fear laying their ears to the ground, as formerly, they again heard the same words reiterated, if not with so distinct yet with a louder accent. Hereat emboldened with truth and childish rage, they went again and testified what they had formerly asserted. He somewhat startled hereat, began to consider of some passages and circumstances that were discoursed of in the Town, both at the time of her death and her funeral, and went presently to the place, and by the direction of one of the boys, laying his ear to the ground, he was presently confirmed in the truth of all they had asserted, though the voice then seemed very faint and languishing : Wherefore he would immediately have persuaded the Clerk to have digged up the grave, but he rephed he durst not do it without authority, so that before they could get Minister and Churchwardens together to consult about it, the after- noon was almost spent, but at last the grave being opened, and the coffin, which they had no sooner done, but the corpse puffed up as it had been a bladder, for the joiner had made the coffin so short that they were fain to press upon her and keep her down with a stick while they nailed her up.

And now surveying her body, they found it most lamentably beaten, which they concluded to proceed from the violence she did herself in that deplorable an astonishment (sic), but upon the most diligent scrutiny they could not apprehend that she had the least breath of life remaining, and therefore they again let her down into the grave, intending on the morrow to send to the Coroner, whom they thought necessary to acquaint with such an accident, in the mean time laying a charge on some persons diligently to watch her that night, they left her. But the night being unseasonably wet, and now all hopes of her second recovery being past, ‘tis believed those who were appointed to that office left her, for on the morrow morning at their return to the grave, they found she had torn ofE great part of her winding sheet, scratcliecl herself first in several places, and beaten her mouth so long till it was all in gore blood.
This second neglect moved the hearts of all that heard of it, especially those that were concerned in the first dis- covery, and the Coroner, when he came to sit upon her, found by all circumstances that her life was clearly thrown away, and therefore bound over several persons concerned therein to answer it at the next Assizes ; * where some were indicted as the authors of her death by their over hasty burying of her : and it would have gone very hard with them, but that a physician in the Town gave it upon oath that when the woman deceased, and was in her trance, he applyed a looking glass to her mouth a considerable time, and yet could not discern the least breath to come from her, a trial he had often experienced, and was never before deceived in, so that they all escaped with their lives, but only the Town had a considerable fine set upon them for their neglect. FINIS. 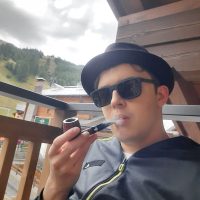 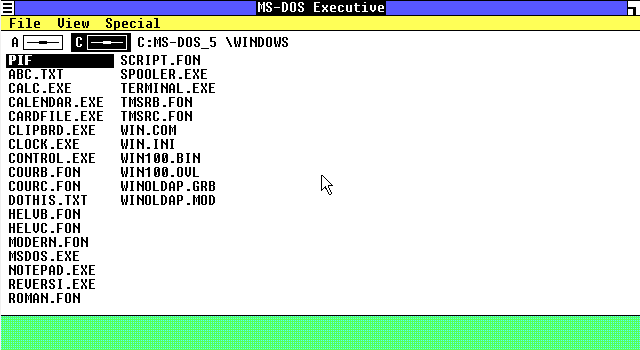 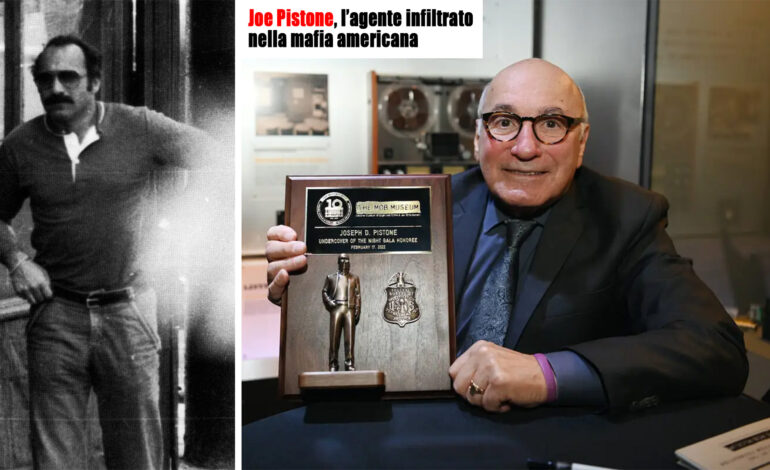 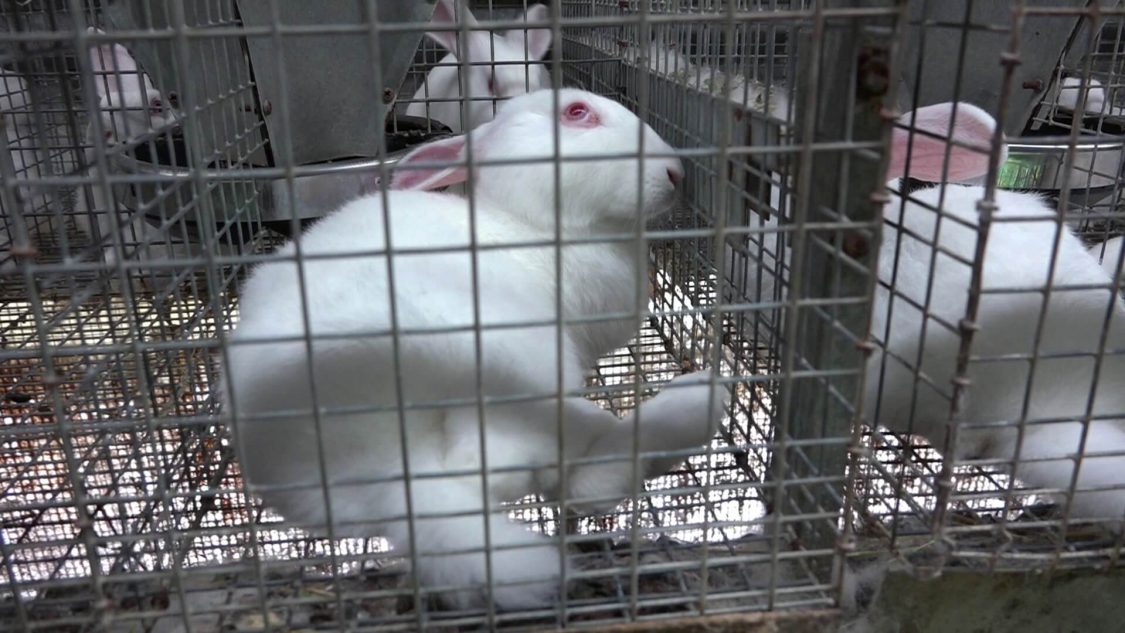 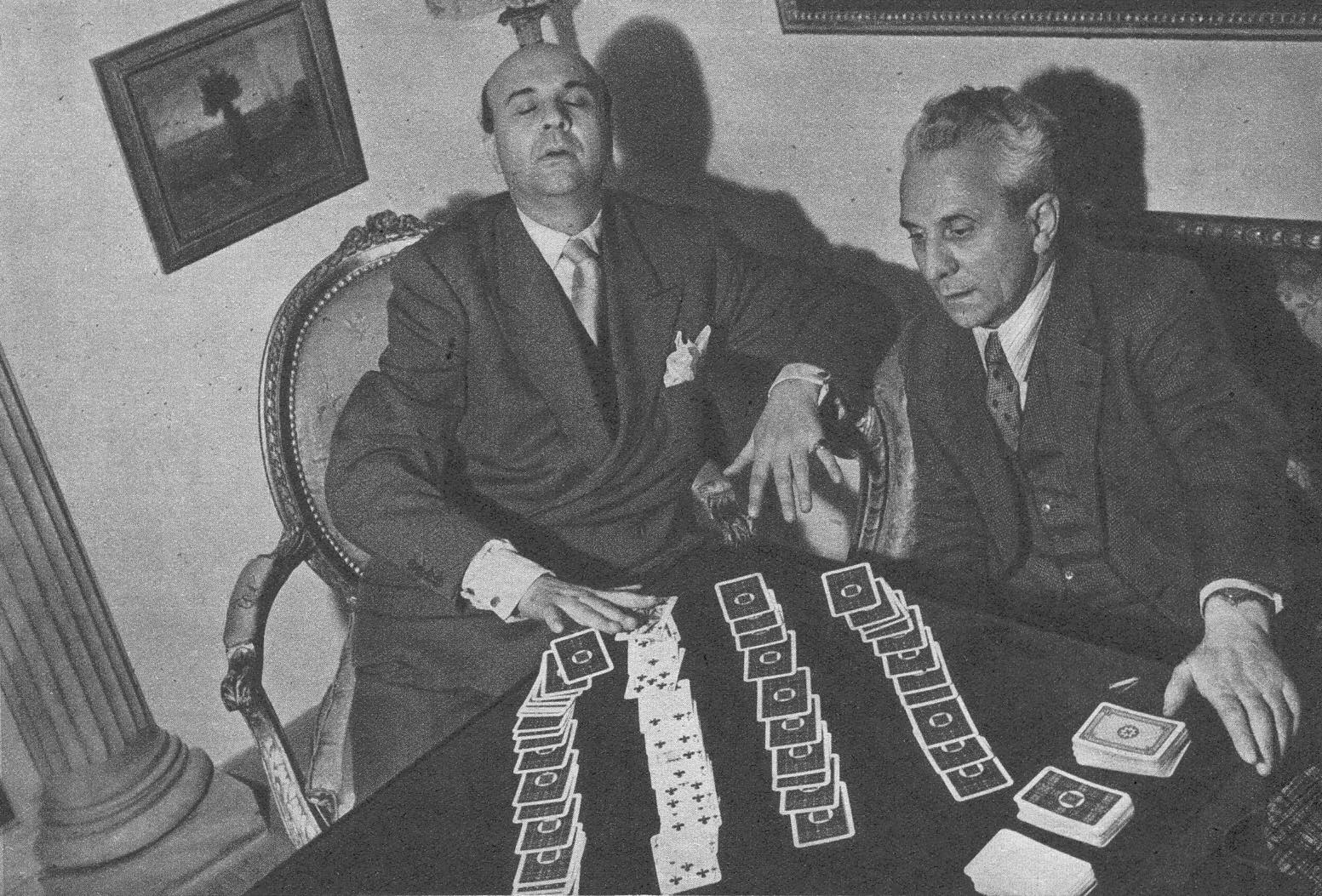 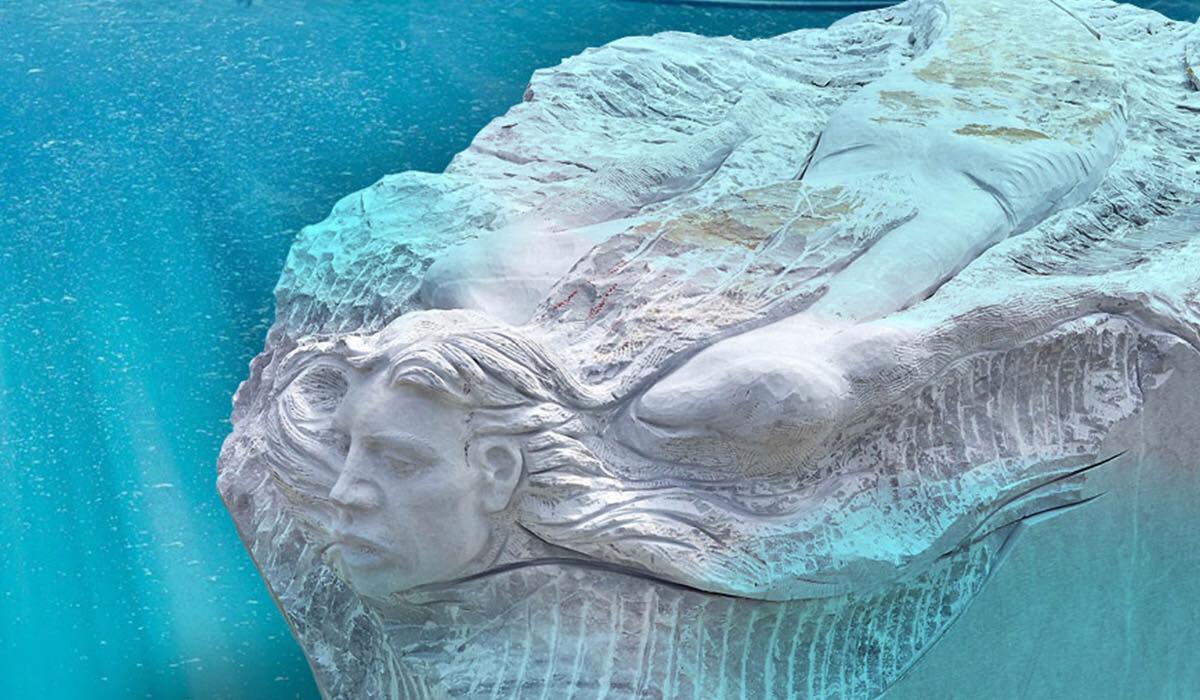 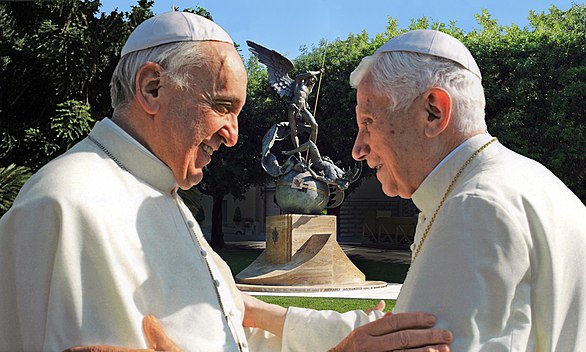 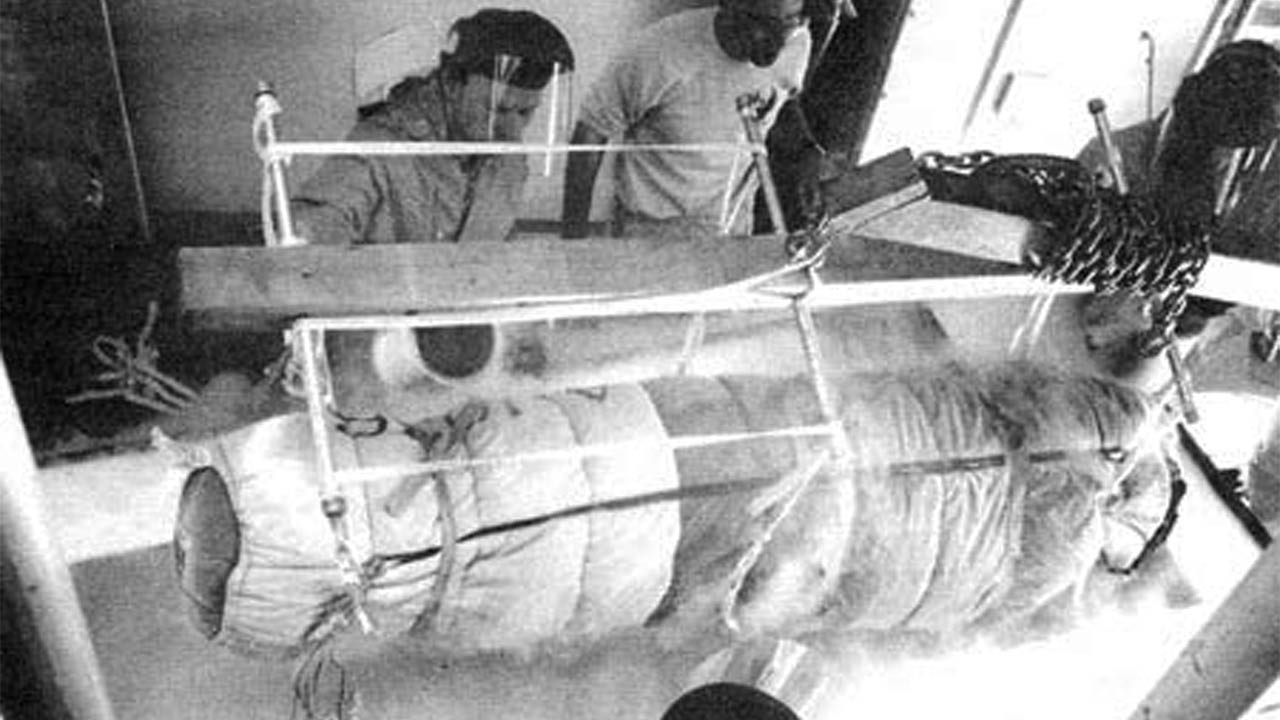 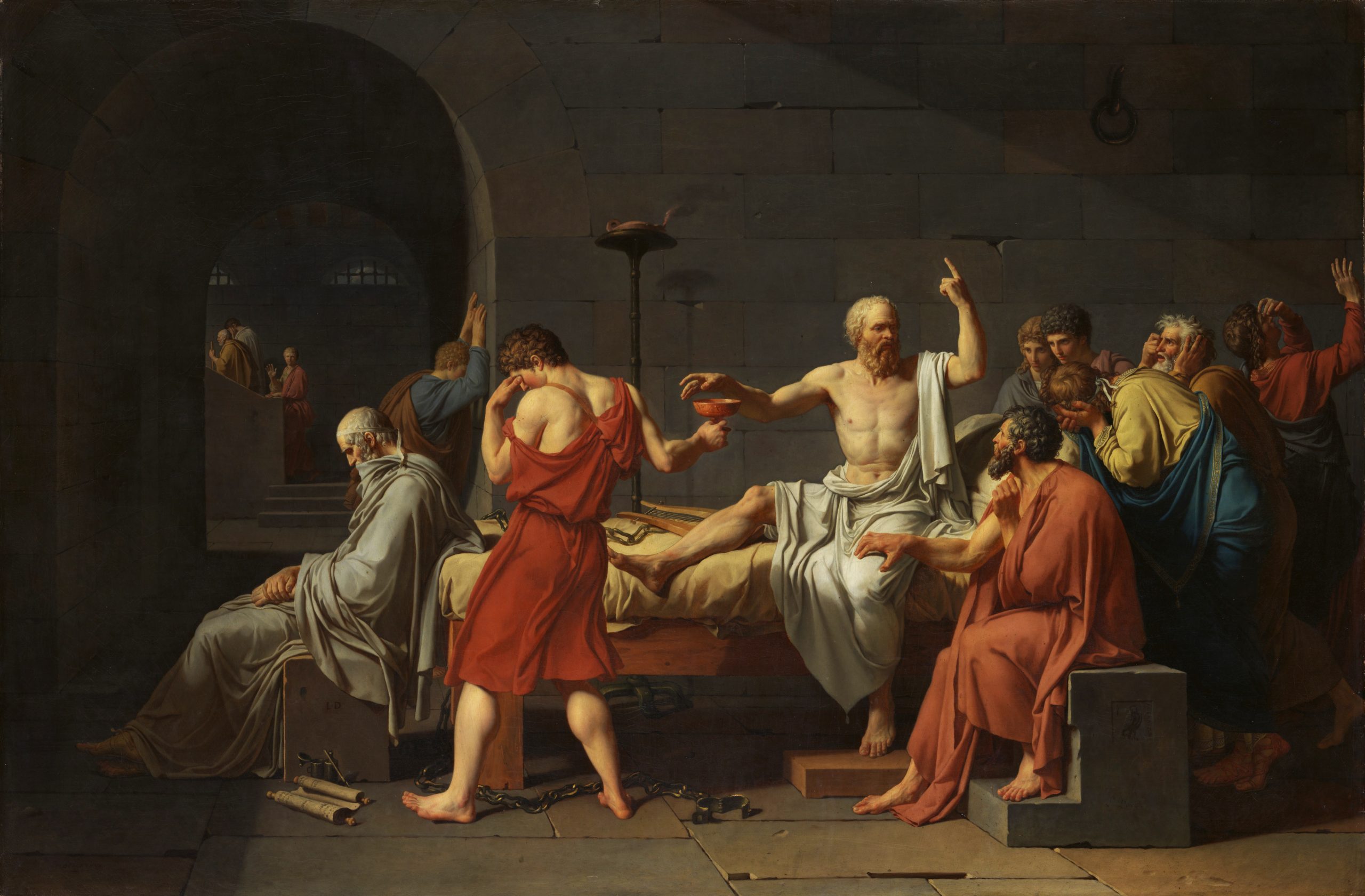